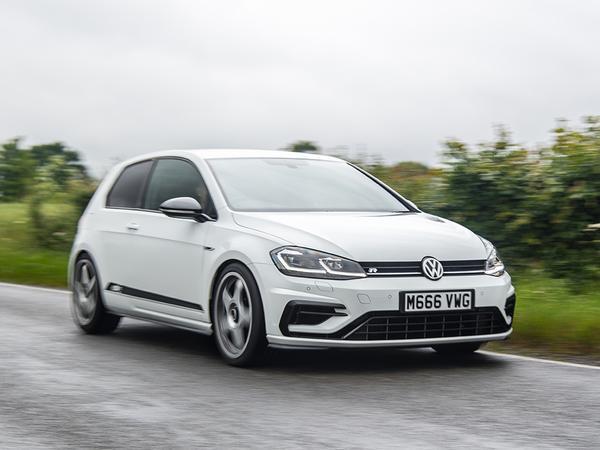 For a good few years now - first drives were in the UK more than five years ago, don't forget - the VW Golf R has been the big-selling standard bearer for the hot hatch class. Sure, it loses out on the finer elements of feel and fun to some alternatives, but the all-round package has proven irresistible to many: quick, assured, accomplished, finely assembled and very good value. That it's a rather more dynamic proposition than slightly leaden flagship Golfs of yore is perhaps its greatest achievement, banishing stodgy memories to the bin and setting expectations sky high for its replacement.

Still, the point stands - a Golf R could be a tad more entertaining. Across the board. Which is where Mountune comes in; or more specifically, m52, its new collaboration with VW tuner fifteen52. California does the styling; Essex does the dynamic stuff - perfect. Given the excellent work of the latter that we're all familiar with, and the fact that fifteen52 are regarded highly enough to be used on Magnus Walker's cars, it sounds like a match made in heaven.

Furthermore, while Mountune has made its name fettling Fords, it does have a considerable claim to fame as far as the wider VW group goes, having built and developed the 1.8 turbos for Formula Palmer Audi. Not the most direct link to making a Golf R go faster, but then it does use another fairly small capacity, four-cylinder, turbocharged VW engine. 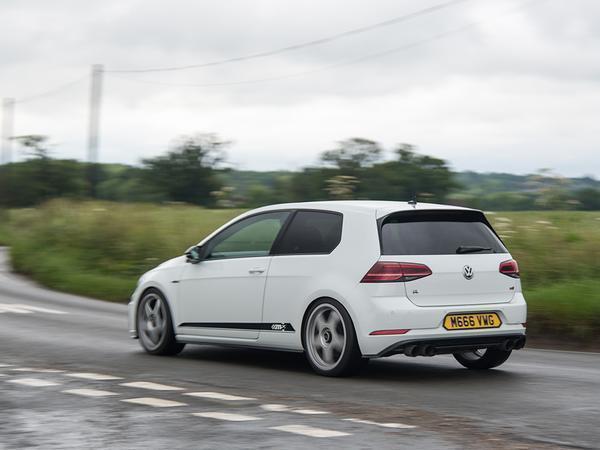 To this particular car then, which the keen will recognise as a facelifted (Mk7.5) Golf R. As the m52 demo car, it has the kitchen sink thrown at it and more, up to and including m52 Clubsport DSG paddles (vastly more pleasant to use than standard) as well as the m52 billet oil dipstick (we'll keep the £70, thanks).

Of primary interest are the dynamic and powertrain upgrades: the car you see here boasts the 360hp Stage 1 upgrade from m52 (with additional induction kit), as well as performance pads and discs for both axles, a sport spring kit, a prototype sport damper kit and a set of delicious 'Chicane' 19-inch wheels from you know who. Oh yes, plus four Cup 2 Michelin tyres - just the thing for the current summer deluge.

And even before getting on the road, there's an argument to say that the Golf R is already a more interesting prospect with the cosmetic tweaks. While loath to use the word 'stance' in discussing modified Dubs on PH, the attitude conveyed by a lower ride height and a sexier set of wheels is undeniable. It's hard to fully get the message across when it was shot in the rain and in a workshop, but this Golf just looks better. A lot better. Sufficiently so that it's already become a more desirable, more characterful hot hatch. Probably. 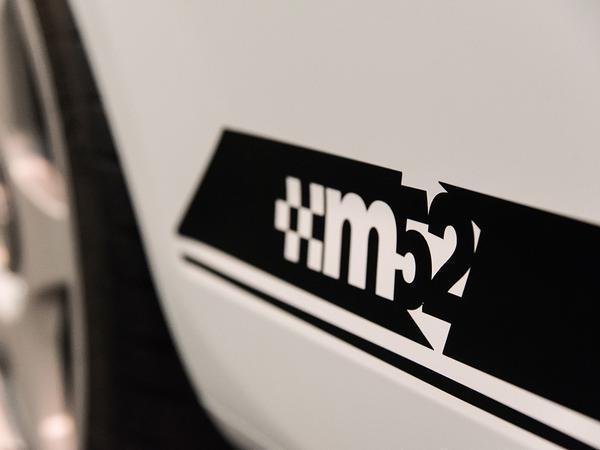 There's far less equivocation required for how this Golf R drives, because it would be impossible to quibble at these changes. Even before moving off the industrial estate, there's an increased sense of connection and purpose to how the Golf moves down the road, seizing your attention in a way that the standard car never quite manages. These (fairly modest) tweaks have brought the driver closer to the action, without a bombardment of gratuitous noise/rigidity/abruptness (delete as appropriate) that can be dolloped on for a sense of character. There's immediate finesse, too.

Predictably enough given its success with Blue Oval products, Mountune says the aim with its VW work is to build upon what the factory created; to enhance OEM characteristics rather than abandon them. Because let's face it: if you want a Civic Type R, you're going to buy a Civic Type R, regardless of what's done with a Golf. If that's what you're into and that's what you like, that's what you should buy.

But if you're maybe three years into Golf R ownership, or own one of the early cars that's out of warranty, and are craving a bit more edge to the experience - without eliminating what's good about the car - then many worse things could be done than paying Mountune a visit. Because this car's very, very good indeed. 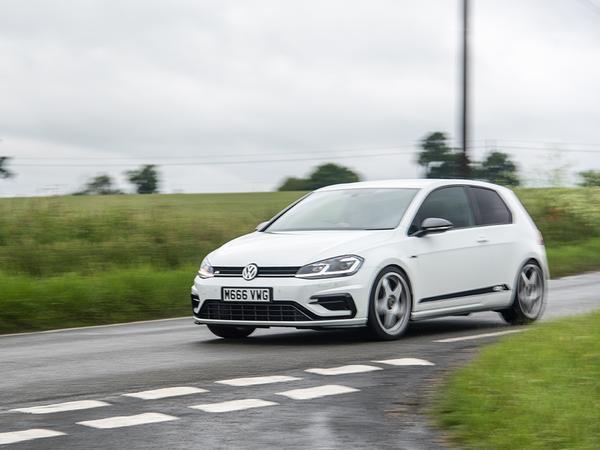 Given the boys at Brentwood know of EA888 units developing 480hp on standard internals, this 360hp/369lb ft tune can be considered pretty conservative. It's damn effective though, again in a way that mimics what went before - linear, impressive, consistent. And now more exciting. Look at the dyno graph and the line traced by the m52's power almost mirrors the regular setup - just higher up the graph. As is often the way with tuned turbo cars, it's the torque that makes the more lasting impression, the Golf now bludgeoning through its mid-range with seemingly no penalty in turbo lag or drivability. Indeed it might feel even more urgent than standard, with an unfamiliar immediacy to throttle inputs.

Performance that feels not far off an M3 isn't familiar, either. Combined with various induction snorts and sneezes up front - courtesy of a new induction kit that will support everything up to 600hp - and exhaust trumps behind, the m52 Golf is a right giggle, even in a straight line. Not something that's usually said about a Golf R. The biggest problem could well be the wheelspin that this torque generates, at least with cold Cup 2 tyres and a moist day...

That the chassis changes probably shine brighter than the very impressive engine retune says a lot about the quality of the m52 work. Again, this car hasn't suddenly become an old Megane, or even a Clubsport S for that matter, but it is a more immersive and engrossing package than it was. The spring and damper combo probably does deliver an edgier ride than stock, yet with the sort of finesse that eludes even the very good regular R. There's that much more confidence to push, because you're that much more keyed into the experience. Aloof is a criticism often levelled at the Golf R, and not one that applies here - it isn't the last word in excitement, but it is fun. 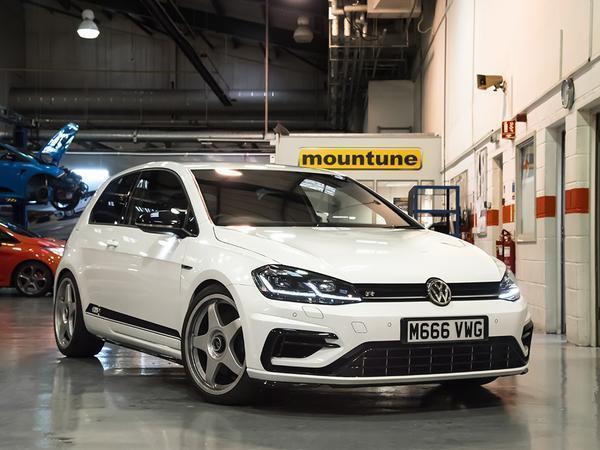 The m52 case is helped further by the brake upgrades, delivering both additional performance and feedback that's crucially denied to the car from the factory. They won't come cheap, though they do feel worth it. As does all of it, really. Apart from maybe that dipstick.

Put simply, the Mountune way most certainly makes sense when applied to fast VWs as well. This feels like a Golf R in all the ways you would want it to, as well as addressing some of the Golf R's less endearing facets. If the Golf R400 had made the light of day and delivered a drive like the Mountune car, the plaudits would surely be flooding in. There's more to come as well, with the DSG software yet to be reworked for sharper shifts and additional power upgrades also on the cards. And the GTI to try. On this evidence, then, there's every reason to be encouraged by Mountune's VW venture - we look forward to seeing what comes next.